The project CASSTIR, funded by the Belgian Science Policy, is a collaboration between BWI, UCL, CEWAC and UGent. The project aimed at stimulating and introducing the innovative friction stir welding technique applied to aluminium alloys in Belgium, as well as obtaining a profound knowledge in this welding process by studying the friction stir joint characteristics into great detail.

In the ISO 9000 series, welding is considered a “special process”, which means that even if 100% non-destructive testing is possible on the welded product, the quality is still not guaranteed. Generally, welding is recognised as one of the most critical steps in the production process of a metallic structure.

For demanding structures, profitability needs to be combined with optimum joint properties, both in terms of mechanical, fatigue and corrosion properties. With good reason, in the last years greater attention goes out to the environmental friendliness of welding processes, mostly dictated by the authorities.

Friction stir welding (FSW) is a joining technique which provides a solution to all
these concerns, especially when applied to aluminium alloys. This solid-state joining
technique was invented and patented by The Welding Institute (UK).
Due to the relatively large investment and license costs, FSW has only recently found entrance to Belgian manufacturers (namely, Sapa RC Profiles in Ghlin). 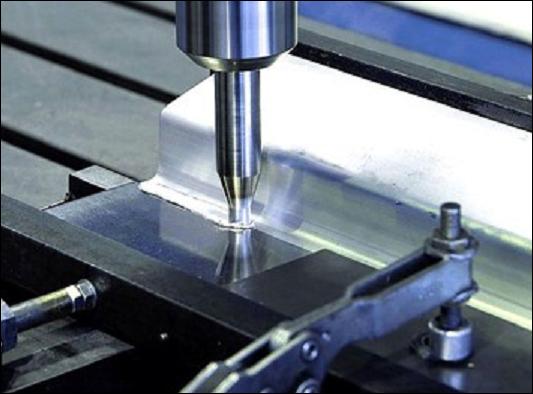 The main advantages of the FSW process applied to aluminium alloys from a technical viewpoint are the following:

Making use of FSW will undoubtedly have a positive impact on the environment as well. The worker’s situation in terms of health and safety will be improved to a large extent, since friction stir welding of aluminium alloys is not accompanied by possible exposure to weld fume, spattering, high intensity UV radiation, electrocution and electromagnetic fields. This provides an important advantage over the currently most used arc welding techniques for aluminium, namely MIG and TIG.

FSW is also environmentally friendly because of its high energetic efficiency (< 20% of the energy need compared to MIG welding), the reduction of waste (such as scrap, solvents and fumes) and the elimination of shielding gases.

The application of this welding process also permits further optimisation of material usage: aluminium alloys which were previously considered hardly or even not fusion weldable, can be joined successfully and reproducibly by means of friction stir welding, resulting for example in weight reduction (such as replacement of rivets by FSW in aviation).
The same kind of reasoning can be followed for weldable precipitation hardenable aluminium alloys: the strength decrease is much less pronounced than in conventional welds, which allows lighter construction.

Based on the process characteristics described above, it is clear that the technique can provide a strategic advantage to many companies from the aluminium-processing industry, especially those manufacturing high-quality products for aerospace, automotive and transport, railway, process industry…

In conjunction with the demands of the industrial partners, 3 relevant applications for which FSW is considered promising were selected as demonstrators in this project. UCL-PRM and CEWAC are the only two research institutions in Belgium in possession of experimental friction stir welding equipment.

The optimisation of the friction stir welding process by CEWAC and UCL-PRM, which is based on a literature review directed to these selected applications, was first carried out on relatively small test welds with a simple joint geometry. For each application, the optimisation procedure was performed in order to achieve optimum welding conditions: tool geometry, welding speed, rotational speed, plunge depth/force…

This optimisation aimed at finding a compromise between productivity, reproducibility, mechanical and corrosion properties. Two different types of friction stir welding equipment (“force-controlled” and “displacement-controlled”) were used for the optimisation, and the transferability of the welding parameters from one FSW machine to another were verified.

The test welds were subjected systematically to an elaborate characterisation, mainly carried out by the BWI and UGent, which includes:

Based on this investigation, the optimum welding parameter sets were selected. With the optimum welding parameters, pre-industrial welds will be performed on actual workpieces as used in production. On these pre-industrial welds, the same kind of examination were carried out as for the test welds, in addition to the study of the long-term corrosion behaviour.

The numerical tool MORFEO was used by CENAERO to model the welding process, executed by UCL-PRM and CEWAC, in order to predict residual stresses and the weld properties. This leads to an additional improvement of the operational welding parameters and to an easier prediction of the best process parameters.

At that stage of the project, deliberation of the FSW technique over other techniques was possible. For that purpose, on each selected application an alternative joining process was applied in order to achieve the same structure.

A comparison in terms of properties was made, after which a cost calculation was prepared. Based on input data from the companies (e.g. the foreseen annual production), the FSW process was compared with the alternative technique in terms of profitability. The Return On Investment was also calculated. It was verified to what extent FSW is more environmentally friendly than the alternative welding process, in terms of energetic efficiency, production of waste, fumes, radiation, electromagnetic fields…

The participating companies and institutions were able to judge, based on the experimental results, whether the necessary investments to put the highly innovative FSW process into production will lead to profitability and improved competitiveness on a longer term. The project provides a smooth transition for the friction stir welding technique from laboratory experiment towards industrial application in a three year period.

This federal project, funded for 100%, is a collaboration between the following Belgian partners:

In the first stage of the project, three technically challenging and industrially relevant applications were selected for study within project CASSTIR, based on input from the CASSTIR Follow-up Committee. These were the following:

These applications represent a broad spectrum in terms of joint geometry, base material thickness and alloy composition.

Application 1 concerned butt joining of relatively uncomplicated rectangular hollow profiles. After initial parameter optimisation on flat profile, friction stir welding was applied to the hollow profile with increasingly smaller vertical wall thickness (which acts as a support for the high downforce during FSW), striving to find an optimum between friction stir weldability, extrudability of the base material and weight limitation. This finally resulted in the realisation of 4 m long friction stir welded extrusion profiles with significantly reduced vertical wall thickness, produced at a welding speed of 2 m/min. Friction stir welding can be applied in either displacement control or force control mode. For the realisation of long weld lengths, where thickness or height variation along the weld joint becomes possible, only FSW in force control mode yielded defect-free welds, hence this is the preferred approach for this type of application. Optimised friction stir welds of application 1 were subjected to testing procedures developed by BWI and UGent, including dynamic four-point bend tests and de-icing salt corrosion tests. The FSW process was compared to hybrid laser welding (HLW) in terms of cost and energy consumption.

An elaborate study was dedicated to optimisation of material consumption for the production of deeply-machined aerospace parts in a non-fusion weldable highstrength aluminium alloy (application 2). The aim of this study was to weld flanges in an overlap configuration onto a thick base plate in two consecutive passes rather than to machine them, which would reduce material losses by machining by 40-50%. Hence, in this case FSW was used as a near-net shape processing technique – an approach which is still fairly unknown and undocumented. The main challenge in this investigation in order to achieve defect-free welds with reasonable productivity was to find an optimum between the initial base material temper, the friction stir welding parameters including tool geometry, and the post-weld heat treatment. The resulting flanges were subjected to metallography, microhardness testing, fracture mechanical testing and corrosion testing. 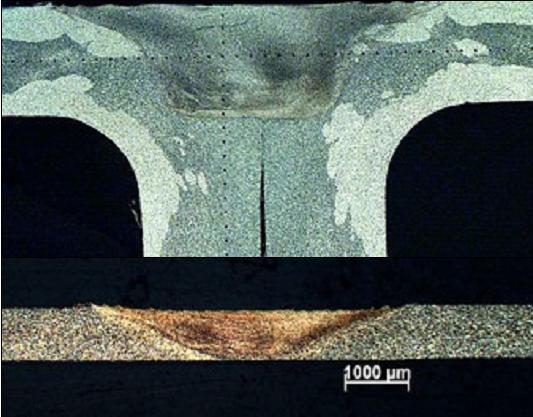 Application 3 concerned FSW of thin (< 1 mm thick) sheet. This is a topic which is internationally still in a development phase. Within CASSTIR, good quality joints were produced with FSW at an acceptable welding speed (up to 1 m/min) by using "nonconventional" tool geometries. It was found that phenomena which are not as important in high thickness alloys, such as thinning due to the tool imprint, may have a significant effect on the mechanical properties in lower thickness material. Besides FSW, also conventional (TIG, MIG) and more advanced (laser beam welding, Cold Metal Transfer) fusion welding processes were applied, which made it possible to compare all processes in terms of economy and energy efficiency. 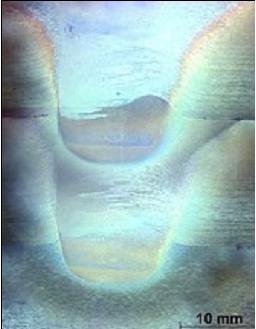 Project CASSTIR allowed the research partner UCL to become experienced in the measurement of residual stresses by means of the crack compliance method, a relatively fast and cheap technique compared to other methods. This technique was applied to selected welds – both realised with FSW and alternative welding methods – from applications 1 and 3. The subcontractor CENAERO developed friction stir welding models for applications 1 and 2, which were validated against experimental results such as temperature evolutions.

Generally, good correlation was obtained between the experimental results and the simulations, which indicates that the very challenging task of Project P2/00/02 – Innovative joining of critical aluminium structures with the friction stir welding technique - CASSTIR TAP2 - Programme to stimulate knowledge transfer in areas of strategic importance 20 modelling the FSW process is moving into the right direction. The specific interest in modelling is to predict optimum welding parameters for a given application, rather than basing the welding parameter optimisation on trial-and-error.

The economic comparison of FSW with other welding processes, carried out for applications 1 and 3, proved that FSW can be highly cost-effective, even though an important license cost is associated to the process. However, it is clear that FSW is especially interesting when joints with high quality and good visual aspect are demanded, for products which have large production series and/or large weld length in common. Every welding process has its own domain of application, and this is certainly also true for the friction stir welding technique. For instance, FSW applied to application 3 yielded good results in terms of weld properties – however, as alloy 5754 has good fusion weldability, other welding processes can be considered more cost-effective for the given application. On the other hand, this investigation has also proven that a conventional milling machine adapted for FSW can successfully friction stir weld aluminium alloys (which may not be fusion weldable) with thicknesses below 5 mm. Based on the discussion included in the report, it is justified to state that FSW corresponds to safe and environmental friendly joining technology: there is no need for chemical agents, shielding gases or other consumables, and the process does not involve UV radiation, spatter, weld fume, high electric current or electromagnetic fields. Furthermore, the process offers a high energy efficiency when applying a welldimensioned FSW machine for the application in question.