Friction welding is now well established as one of the most economical and highly productive methods in joining similar and dissimilar metals. It is widely used in automotive and aerospace industrial applications. Friction welding is often the only viable alternative in this field to overcome the difficulties encountered in joining the materials with widely varying physical characteristics.
This process employs a machine that is designed to convert mechanical energy into heat at the joint to weld using relative movement between workpieces, without the use of electrical energy or heat from other sources.

In friction welding, heat is produced by rubbing components together under load. Once the required temperature and material deformation is reached, the action is terminated and the load is maintained or increased to create a solid phase bond. Friction is ideal for welding dissimilar metals with very different melting temperatures and physical properties.

The action of rubbing two objects together causing friction to provide heat is one dating back many centuries. The principles of this method now form the basis of many traditional and novel friction welding, surfacing and processing techniques.

The friction process is an efficient and controllable method of plasticising a specific area on a material, and thus removing contaminants in preparation for welding, processing, surfacing/cladding or extrusion. The process is environmentally friendly as it does not require consumables (filler wire, flux or gas) and produces no fumes.

The principle of friction welding in its most simple form is presented in Figure 1. Suppose that two axes or tubes have to be butt-welded, then one part is clamped while the other is rotated and pushed against it. If both parts are in contact with each other under a controlled axial force, the friction forces cause a resisting torque. The resulting mechanical energy is converted into heat in the contact area. The generated heat increases the temperature in a relatively short time to the welding temperature. The rotating part is then disconnected from the drive, decelerated and an axial forge force is exerted to create the weld between both parts. During the heating phase, plastic material is pushed out of the weld zone under the influence of the axial compressive forces, to form the characteristic welding flash (see Figure 2). 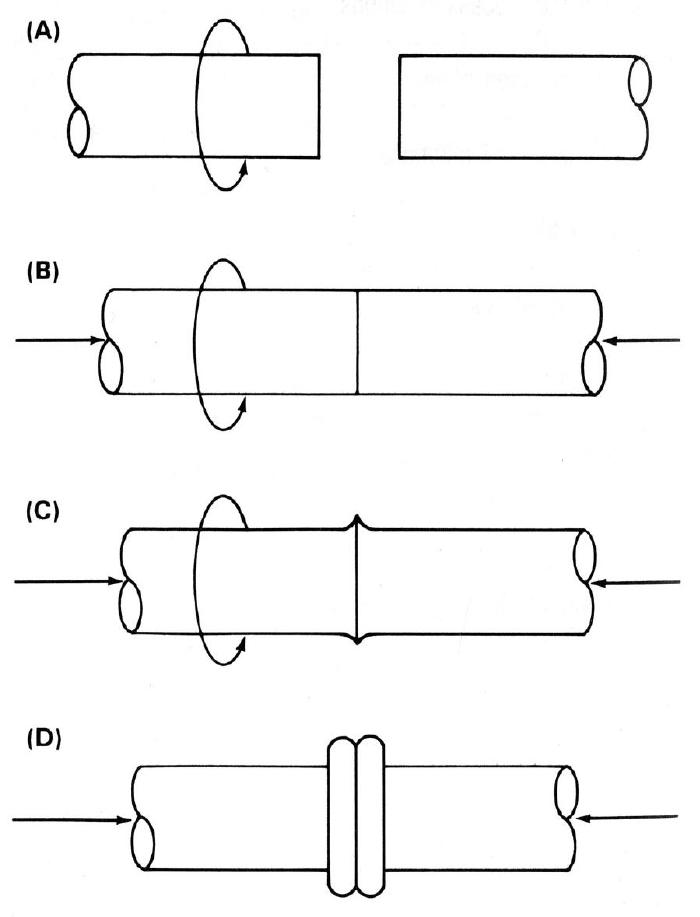 The most widely used variant of the process is the rotational friction welding process. It can be used for connecting rotationally symmetrical workpieces, such as tubes and rods (Figure 2), but also for some more complex geometries, as shown in the figure 3.

In addition to the rotational friction welding process, there are a number of other variants. Orbital friction welding can be used for workpieces with a non-rotationally symmetrical cross section welding (see Figure 4). Both workpieces are brought into contact under a controlled pressure and one part performs a small circular motion compared to the other. This provides a uniform tangential speed over the entire surface. If the movement stops, both parts are quickly aligned with each other and the forging force is applied to create the weld.

In linear friction welding (Figure 5), the necessary heat is generated by a back-and-forth motion of the workpieces to be welded. This process can also be used for welding of workpieces with a non-rotationally symmetrical cross section.

Advantages of the friction welding process

The friction welding process can be used for a variety of applications. It can for example be used in the aerospace industry for welding hook bolts (Figure 9), for the manufacture of lightweight piston rods (Figure 10) or for parts of gearboxes (Figure 11).

Friction welding is also used in the petrochemical industry, for example for welding flanges to the housing of hydraulic valves (Figure 12) or for welding drill pipes. The friction welds are strong enough to resist the high torques during drilling.

Using friction welding, it is also possible to connect materials which are impossible to join with the conventional welding processes. Examples include aluminium to steel (Figure 14) or titanium to copper. This option allows to save costs, by a smart design of such components. An example of this is the design of a valve of an internal combustion engine (Figure 16). The valve disk in made of a heat resistant material, to be welded to the valve stem made from a wear-resistant material. Other examples of bimetal connections are shown in the figure 17.

Friction welding is also widely used in the production of spare parts for trucks and agricultural vehicles (figures 18 and 19). Substantial cost savings can be achieved by replacing fully forged pieces by smaller forgings welded to rods or tubes.

Friction welding is used for the production of parts in the automotive industry, such as stabilizers, valves, drive rods, steering columns, water pumps, … 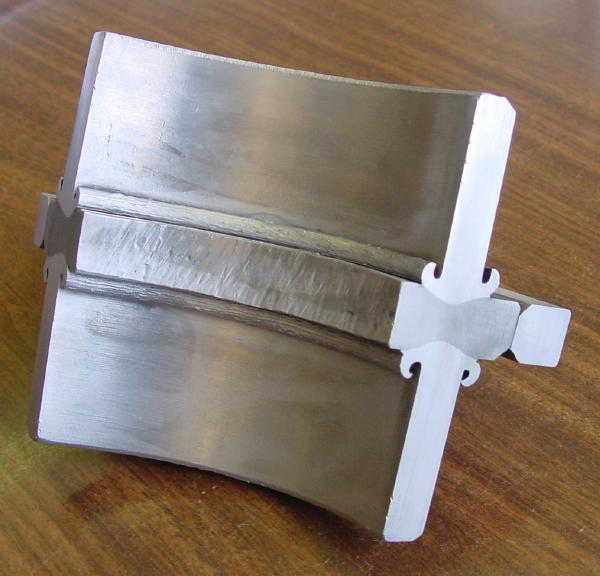 For confidential investigations for the specific needs of a particular company, BWI can perform contract research commissioned by the industry.